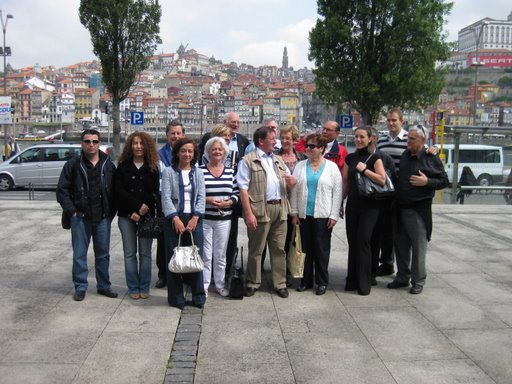 The OCEAN Board met in Porto, Portugal in May 2009

The “Associação Portuguesa de Fornecedores de Navios” had invited the OCEAN Board and the EU Commission to the romantic and famous World Heritage city of Porto in Portugal. In a detailed discussion with Board members, Mrs Cabral gave answers to the practical questions of the Board members.

To better understand the national impact on the decisions taken in Brussels, Joaquim Ferreira (Directorate General Customs), Fatima Gaio and Fernando Pereira (IT e-customs implementation issues) gave important information on the practical implementation of the legal and IT changes for the ship supply procedures in Portugal.

As the day progressed, the discussions about the legal changes to the warehousing procedure under the Modernised Customs Code as well as the current and future changes under the “Automated Export System” continued during Mrs Cabral’s visit to one of Portugal’s ship supply companies.

The impact of the computerisation of the excise control system for the ship supply business was a topic discussed during the groups’ visit to the Sandeman Cellars in Vila Nova de Gaia. Here the OCEAN Board and Mrs Cabral tasted one of Portugal’s most internationally famous products, the Port wine, which is named after the city because it is produced in, and shipped from the area.

Finally, the Board appreciated breathtaking scenery of the historical town and the majestic “Ponte D. Luis" on the “rabelos”, the traditional boats used to transport barrels of Port wine, on the Douro River. Mr Ericson told the assembled guests: “Mr. Pinto - the Portuguese OCEAN Board representativ  - is not only a true, long-standing expert with a wealth of knowledge as regards the practical impact of customs legislation for shipsupply, but he and the Portuguese Shipsupply Association are also perfect hosts.

“We are grateful for allowing the OCEAN Board to see firsthand how modern ship supply operates in what I learned to be one of the most beautiful places in Europe ” Mr Ericson went on to thank Mrs Cabral for her efforts in taking part in the OCEAN Board meeting and for the frank and honest exchange of views. “By making the long trip to Portugal, you have demonstrated once again your and the European Commission’s sincere commitment to a genuine and regular trader-legislator dialogue and your efforts to bring about real and meaningful trade facilitation for economic operators during these troubling times”.