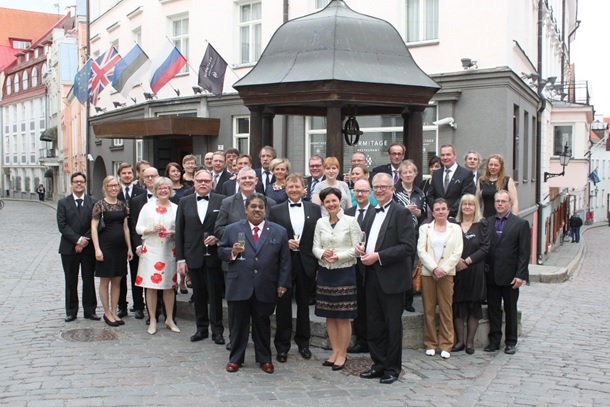 During the 40th birthday celebration of OCEAN in Brussels, OCEAN Chair Dirk Cupido publically congratulated FSSA on its 70th birthday. The association sends us this truely European report:

Celebration started with a sea voyage from Helsinki to Estonia´s capital Tallinn. From the harbour all 38 celebrators were transferred to a luxury boutique Hotel St. Petersburg in the heart of the Tallinn old town.

ISSA´s president Mr. Abdul Hameed Hajah and ISSA  Secretary Mr. Spencer Eade joined them. After settling in to the softly decorated rooms, a traditional Estonian dinner was served in restaurant Kuldse Notsu Kõrts. After a tasty borscht soup and well prepared steak accompanied with a traditional schnapps, guests started to enjoy their stay at the hotel!

Next morning after a nice made to order-breakfast people had a chance to walk around the beautiful old town and shop in the various handicraft and design shops. In the afternoon

FSSA members had the annual Assembly at the hotel, led by chairman Mr. Matti Kokkala. Evening celebrations started with champagne tasting, which was conducted by hotel´s sommelier. Champagne was employed to toast FSSA and Chairman Kokkala after several congratulatory speeches.

After “official” part of the celebration, started a luxury six courses gala dinner complemented by the chef´s several amuse bouches and high quality wines. Food was excellent and dinner lasted several hours, lifting the event to a level which was suitable for a 70-years jubilee.