Archiv
07.07.2017, 16:43 Uhr
OVERVIEW | PRINT
OCEAN comes to Greece
European Ship Suppliers to Athens during and after the 62nd ISSA Convention & Trade Show
ISSA Members from some 50 countries – many of them in Europe – will be meeting and networking at this year’s 62nd ISSA Convention & Trade Show in Athens, Greece.
Athens, Greece - Being staged at the Hotel Divani Caravel in Athens – handily situated for down-town attractions and the famous Greek Maritime Cluster – this year’s Convention will be over the two days of 10th & 11th November.

Some self-examination is going to take place with Convention theme confirmed as “Enhancing the ship supplier’s image”.

Although ISSA Members have been punching well above their weight in recent times, it is felt that there is still some room for polishing the image of ship supply as a core sector of the maritime industry and trumpeting the importance of our industry to the ship owning community. The old adage that a ship can’t sail without supplies remains as true today as it has always been.

Already the thriving Greek maritime community has pledged its support for ISSA’s premier event with several high-powered purchasers and owners promising not only to attend but to take a full and active part in Plenary.

Styled very much of the moment, Plenary will have a series of informative, educational and entertaining presentations each of which concludes with what is hoped will be a lively Q&A Session.

Audience participation is positive encouraged so even if you are shy the warm family atmosphere of an ISSA Convention will encourage you, we hope, to take a full and active part in the debate.

Modestly priced and in an enviable location, ISSA 62 (as it is dubbed) promises to be a sell-out. Early Bird discount on the Delegate Fee is still available but not for long so do book via the ISSA web site www.shipsupply.org.

The OCEAN Board Meeting is scheduled to take place on Sunday 12th November, the day after the ISSA Convention concludes.

A civilised start time will be arranged to accommodate the Gala Dinner attendees from the night before who might wish a gentle entry into their day!

The Working Group on Customs & Taxation will meet the day before as usual.

So as they say in Greek: Sas vlépoume stin Athína! 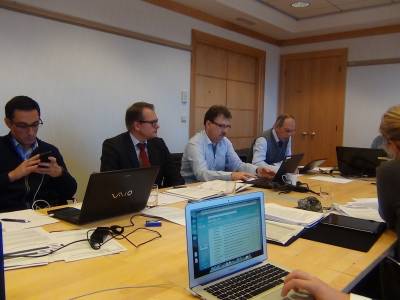